Citizens, and criminals walking around with guns legal are not, it didn’t work during the wild west days. because if it did, things wouldn’t have changed. If something doesn’t work, people stop using it. If it does work, it evolves ,or it stays the same. Either way there’s continued use. If you have a permit to carry a gun, if someone with a gun drawn on you wanting your money. You would get shot before you can pull out your gun. Then after he robs you and runs away. He’s no longer a threat. Then if you choose to shoot at him. Then you become a suspect in a crime. Every law biding citizen should not have a problem with stricter guns laws, because it’s not making it harder for them, only the bad guy should have a problem with it. There should at least be a background check on ammunition, because now you can be a convicted felon, and you can still purchase ammunition for a gun. All you have to be is 21, and have I.D. Some people say “they will still get the bullets”. This is my answer. You have to be 21 or older to buy alcohol, but teenagers are still getting it. You have to be 18 to buy cigarettes, but teenagers are getting those too. pass the law. Then at least it will be a crime for a felon to have bullets. If someone buy the bullets for them. They will be committing a crime too. What’s it gonna hurt, NOTHING.

A highschool student was playing basketball with his friends at a local park in my home town here in Mississippi. Somebody drove up, and they got out of a car, and they began shooting. This young man was the only one hit by the stray of bullets. He wasn’t even the one that the shooter was after. This tragedy happened in August 2012. The bullet cannot be removed because it’s next to his spinal cord. He has to get around in a wheelchair. This young man is friends with my children. That could have been one of my kids. That is why i wrote a proposal for a bill. You would have to pass a criminal background check to purchase ammunition. The ammunition would also have to have serial numbers on them. I mailed the proposal to my Senator. He liked it. The proposal was wrote up as a bill then introduced on the floor. It died in committee. It didn’t get the majority votes need to proceed. Some states already have a law that says you have to pass a criminal background check to buy bullets. People can pay someone to buy bullets for them, just like teens pay people to buy them cigarettes, and alcohol. You have to register to buy a gun, why not bullets too. The gun is useless without the bullets. What about the guns that are sold on the streets. What’s stopping them from buying bullets, nothing. I don’t know what powerful force that has their hand in these lawmakers pockets, there’s nothing more precious than a human life. We elected these politicans into office, and they act like they were appointed. If any of you want to check it out. Mississippi Legislature- senate bill 2693. The bill was named after the kid who was shot, keyaurdra. This wasn’t just another kid. This was personal. How many more kids have to get shot, and or die for somebody to say enough.

Being bullied has caused mass killing in some schools across the United States. It has also been the cause of many suicides.  Boys, girls, and children with Downs Syndrome are bullied daily. I created a page on www.facebook.com called post a pic of a bully to help teens speak out by posting a picture of that bully. Allow the world to see this person. The bullied is hurting, but the bully is hurting also. I was bullied as a child. As a teenager I became a bully. One day i remembered what it felt like to be bullied. I stopped bullying, and I started protecting the ones being bullied. I didn’t like my life, and what i was going through. I wanted someone to feel as sad as I did.

I Had an idea for a bill that I thought should be made a law.  The guns are already on the streets. I am talking about talking tougher laws on bullets. It would make it harder for criminals, and people who are mentally ill nearly impossible to get them.  I contacted the necessary people. The Senator for my state told me that he thought it was a great idea. I am patiently waiting. I reached my breaking point when a kid was shot by a bullet that wasn’t meant for him. Something like that isn’t normal in my town. If my bill doesn’t become law, ” God help us”.

The greatest thing a person can give someone is life. You are creating something that is part of you. Something you hope that will grow up to be a better person that you are. Somebody to pass on your thoughts, your beliefs, and your name. If some of you don’t have a kid. You should spend some time with somebody’s kid. You just might teach that child something it will hold onto for the rest of it’s life.

Here’s where it gets personal. I was raised by a single mother that had me when she was 14 years old. I know the sperm donor. I met him a few times in my life. When I was growing up. There was some things that I had to learn on my own. for instance: shaking it at least twice after you pee, or how to be a man. I learned on my own. I knew that I wanted to be a better father than he was, and I am. I was never hugged as a child. Nobody never told me they loved me other than the girlfriends I had growing up. When my two sons, and my daughter became teenagers. I told them that i loved them, but i wouldn’t give them a hug, only a pat on the back. One day they came to me, and they asked me why don’t i hug them? I said,” I don’t know”. I have been hugging them ever since.

When you take someone’s life. There are no do overs. Do not let the anger control your train of thought. There is always a second choice.  The taking of a life is a permanent solution to a temporary problem.

Most people have full coverage, while others have liability only, and there are a few who has no insurance. When you have full coverage. Your car is repaired no matter what. If it’s not your fault you want the other guy to pay.  While liability will fix their car only, and it has to be your fault. Your car will have a scar for the rest of its life. The people without insurance don’t always stick around. Get full coverage for your automobile, and if you don’t. Pray that you never get hit.

People who own guns should have to pass a criminal background check  to buy bullets. There are more guns that are sold on the streets than in gun stores , and pawn shops. Anybody that is ol

d enough can walk in off the streets, and they can buy bullets for any gun. Maybe the metal bullets should be replaced with the rubber bullets the police use for certain situations. Those bullets will get the job done without taking a life. For instance: armed robbery, hostage situation, drive by, suicide by a gun,a drug deal gone bad, or just plain stupidity. I have emailed my senator about this matter. A friend of my children was shot with a bullet that was meant for someone else. Instead of shooting in the air. He aimed his gun at a crowd. A teenager was hit in the back. Help me do something.

People were waiting in lines for days to buy a phone made for $8 or $9 dollars in another country, and they are being sold here for $500 unless you get the two-year contract. Everybody don’t like outsourcing( buying  something made from cheap labor in another country), except when it comes to something they want. Your right, i was thinking the same thing. We are full of sh**t. 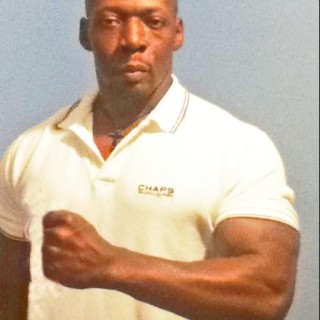 I am black, bald, and I want to share my thoughts with the world. I didn't pose for this picture, my arm is stuck like that, lol.